When working together, there’s nothing like the personal touch. 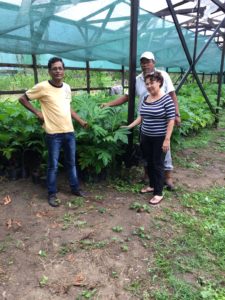 Mary and Mike McLaughlin reach out by email, phone call, and various multiple social media channels. But when the time came to launch TTFF’s tree planting and entrepreneurship programs in Suriname, Mary and Mike felt they had to be there.

TTFF met Reiner Taus originally in Haiti, at the Breadfruit Symposium in Port au Prince in August 2016. Reinier works in the Suriname Ministry of Agriculture, and also serves as the Suriname coordinator for CaFAN, the Caribbean Farmers Agricultural Network. He received 2,000 Ma’afala breadfruit trees, provided courtesy of Global Breadfruit, our working partner based in San Diego, California and Frankfurt, Germany. TTFF committed 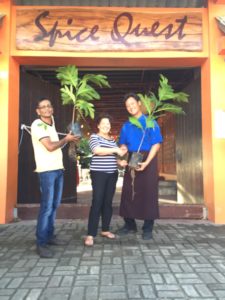 to assist with information and later with Factory in a Box equipment for processing the fresh breadfruit into chips or flour.

Mary McLaughlin visited the government agricultural station where the young trees are being hardened. Now, several months later, the trees are ready to be planted in the fields by farmers. The Government is looking to recoup the costs of hardening the plants, so TTFF agreed to a subsidy such that the plants could be sold locally at an attractive price. Mary also bought 30 trees and distributed them during the course of the visit. 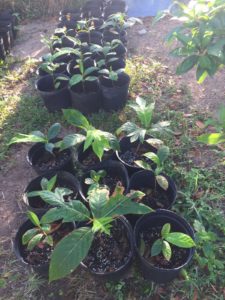 Mary accompanied by Reinier visited the Permanent Secretary of the Ministry of Agriculture, Mr Djoemandie Kasamnoesdian, to discuss the program, then was interviewed on Suriname television by Shurly Larkin, head of the station. Together they planted a breadfruit tree on the grounds of the station! TTFF will also provide additional trees to an indigenous community in the rural farming areas of the country. 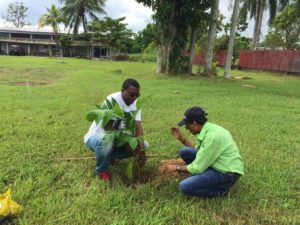 Later as the program develops and more trees come into fruit, Reinier and his business partner will be provided with equipment to set up a processing factory.

After leaving Suriname, Mary and Mike visited Barbados and Trinidad & Tobago, for several meetings farmers, government and academics. Our programs are developing there.  But that’s a story for another day.